Just returned from one wholly awesome week of CppCon. This year the conference was held at The Gaylord Rockies Convention Center in Aurora Colorado, just outside Denver. This place is huge, take a look:

I arrived on Friday to meet up with my fellow CopperSpice team members, Barbara, Ansel, Tim and Peter. We had a two day hacking session working on CopperSpice and hashed out strategies how to better organize our team. We talked about our new libraries and integrations with Azure Pipelines, further development of the CMake support and a formal funeral for our Autotools support (well, the actual wording was more like, take it into the desert and shoot it, but remember to take a picture).

On Monday Bjarne gave an overview of the current C++20 status, as always, it was a straightforward, well laid out presentation that I think will be very informative to anyone who has not been actively keeping up to date with the proposals in flight during the last 3 years.

Opening for the ‘Back to Basics’ track: Jason Turner, The Best Parts of C++

Jason is always energetic and entertaining to watch; this talk was no exception. The ‘Back to Basics’ track maybe specifically targeted at the newcomers to C++, but I think many of us, also the professionals that have been in C++ for years, learned something. C++ is evolving quickly and sometimes feels like a completely new language. Jason presented a good mix of time trialed good practices and fresh new insights.

Whether you are a fan or not, its good to see that Visual Studio keeps up with the times and brings us exciting features with every release. However in recent years we have really seen a change in Microsoft and the the killer surprise this time was the open sourcing of the STL, the standard library that comes with visual studio!!

Hello World from scratch by Peter Bindels and Sy Brand

A wild ride, energetically presented by Peter and Sy, they explained everything that happens from sourcecode, compilation, linking, loading, until the actual execution to your main() function. I enjoyed this and learned a thing or two along the way.

Copperspice CsPaint: High performance graphics and text rendering on the GPU for any C++ application

Barbara and Ansel presented the latest development that spun out of the CopperSpice development: CsPaint a portable high performance graphics library on top of Vulcan. One of the most notable features was the infinite accuracy text rendering! A unique feature that will be used to render portable and uniform high-DPI 2D UI graphics for CopperSpice on Linux, Windows and MacOS. 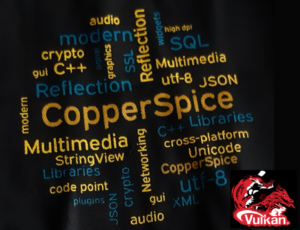 Seans presentation was about the relationships in our code, about thinking ahead about what your program will look like, comparing it with a game of chess, although I feel that usually my computer is not actively trying out moves against me 🙂 I enjoyed the talk and I think a good takeaway was to think about the essential relationships between types and software designs in general. I heard someone say ‘don’t use raw pointers’ was also a take-away, I think that is a little to much simplification and I would generalize that into: think/don’t forget about the null-cases in the results of your functions. Slides and more available soon on his site.

Andrei Alexandrescu – Speed Is Found In The Minds of People

Andrei is sort of a unguided projectile in this talk about sorting while optimizing for medium sized datasets.

This again was a good talk by Jason, focusing specifically on the red flags that should be investigated when reviewing code.

The Wednesday I spend in SG14, the study group for Game Development and Low Latency. Among other things the BLAS (Basic Linear Algebra Subprograms) integration proposals where reviewed.

Really interesting talk on compacting memory using meshing and virtual memory re-mapping. Emory demonstrated an 17% reduction in memory usage in a web browser. The really fun part of this being that this could be done without having the source code nor recompilation.

Matt shows three different ways to implement a path-tracer / ray casting example, analyzing the plus/minuses for the different strategies. A surprising result for me was that in this case the branch prediction was dominating the implementation style.

Also recommended to watch on YouTube if you care about ABI stability. Very nice talk. What surprised me was the Foo() = delete; can introduce a breaking ABI change!

This was a really good talk on the history and future of volatile. Recommended talk to watch when it goes online.

I was mostly asleep during this talk 😉 this was not due to Tony’s presentation, I will have to watch the talk again when it becomes available on youtube.

Timur gave an overview of all the little fixes and smaller features that were put into C++20 at the last SG21 meeting in Cologne.

The Hallway track with Walker Brown, Sean Parent, Stephan T. Lavavej, Louis Dionne, Lisa Lippincott, Timur Doumler and so many others, sorry that I cannot mention everybody in this title 🙂

This years so-called ‘hallway track’, the conversations you have with people outside the talks were, for me personally, the highlight of the conference. I talked to so many interesting people, I was truly inspired by the enthusiasm and openness of literally everybody I approached. I felt like I was literally radiating with pleasure walking that halls of the conference. Thank you everybody!! I hope to see all of you next year!

While writing this post I noticed Matt has also done a trip report, so check that one out too! CppCon publishes the slides for all presentations at https://github.com/CppCon/CppCon2019